As low productivity has long since been identified as structural problem for the country’s economy, experts and stakeholders have urged to ramp up investment in skill development of human resources to create entrepreneurial mass as well as human resources required by enterprises.

Presenting the findings of a study report titled ‘Facilitating the Private Sectors’ Engagement in Technical and Vocational Education and Training (TVET) in Nepal’ during an interaction programme jointly organised by the Support to Knowledge and Lifelong Learning Skills (SKILLS) project under United Nations Development Programme and the Societ y of Economic Journalists Nepal, Mahasharam Sharma, former education secretary, said that out of the 450,000 job-seekers that enter the labour market every year in Nepal, only around 100,000 get opportunity of TVET. And majority of the job-seekers that enter the market every year leave for foreign employment as the country does not offer enough job opportunities.

On the other hand, a large number of migrant workers — around 90 per cent — are unskilled and semi-skilled and they are working as cheap labour force in the Middle East and other labour destinations. Against this backdrop, according to Sharma, the government should join hands with the private sector to produce skilled human resources through massive technical and vocational education and trainings.

“Private sector has not approached training institutions to develop the human resources as per their requirements,” according to Sharma. “There is communication gap between the institutions that provide technical and vocational
trainings and enterprises.”

As per Sharma, there is lack of analysis from the private sector regarding the requirement of human resources for a particular field or industry.

In the programme, Kishore Pradhan, vice president of the Federation of Nepalese Chambers of Commerce and Industry (FNCCI), opined that if the government extended its hand for collaboration with private sector regarding operating such TVET providing institutions, the private sector would design skill development courses and forecast demand of the workers in various industries like, agriculture, tourism, construction, service, manufacturing, among others.

He stressed on the need for strong collaboration between the private sector and skill development institutions so that the human resources developed from the TVET providers could be easily absorbed.

Heema Devi Khadka, assistant country director of Project Implementation Unit-UNDP, said that the TVET and enterprise development should go together to give boost to the country’s economy.

According to Bishnu Prasad Aryal, joint secretary of the Ministry of Education, the government is going to develop a TVET Fund to run all types of trainings in an organised manner. Currently, 17 ministries have been running various technical, vocational education as well as skill development trainings. But the resource mobilised by the government and non-government sector remain largely scattered.

Around Rs 17 billion is mobilised by the government and development partners every year, but it has completely failed to achieve the desired output. The government is consolidating all the resources under TVET Fund and will develop a TVET Authority in the future to create synergy. 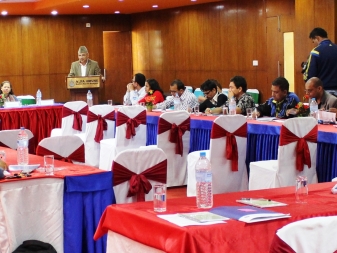